The probability of survival for an organism is positively correlated with its ability to gather accurate information concerning its surroundings. Gathering inaccurate information will lead to improper or high risk behavior that could lead to the death of the organism. Within the aquatic environment, fish rely heavily on auditory, olfactory and visional cues. It is indubitably apparent that disruption of any of these sensory systems will ultimately decrease the probability of survival. With the rapid addition of anthropogenic CO2 into the oceans, the decreased pH has been shown to alter such systems. 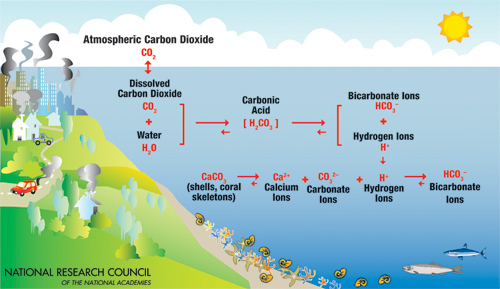 A vital component in the auditory system of fish is the otolith. These calcium-based bony structures detect variations in compression waves and relay that information to the brain. As carbonate is added into the system via CO2, the otoliths’ growth rate is accelerated. Checkley and others reared white sea bass (Altractoscian nobilis) in solutions of 380 µatm, 993 µatm and 2558 µatm of CO2. Over the course of 8 days, the addition of CO2 stimulated growth in all three otoliths (sagitta, asteriscus and lapillus). The data showed an increase of size approximately 7% – 9% in the 993 µatm concentration and an increase of size approximately 15% – 17% in the 2558 µatm when compared to the 380 µatm control group. In 2013, Bignami and others found similar results in the cobia (Rachycentron canadum). Their data showed an increase in relative mass of the sagittal otoliths in cobia raised in higher CO2 levels. The alteration of both size and mass of the otoliths influences auditory. The increased mass and size allow the individual to discern lower frequency sounds and auditory cues from further distances. Bignami suggested the increase of background noise could be detrimental to many vital processes. Cues regarding habitat selection, predator evasion, navigation and basic kinesthesis will be masked, and recruitment, survivability and connectivity will suffer. Much research has been carried out regarding the role auditory cues play in the settlement of reef fishes’ planktonic larvae. Planktonic larvae typically avoid reefs during the day due to auditory cues of predators. However, when subjected to increased levels of CO2, planktonic larvae appear to disregard these cues and exhibit risky behavior around predators of the reef. With oceanic acidification advancing and promoting increased otolith growth, the sounds of a natal reef will most likely be lost to the increased noise of distant sources, and the settlement of planktonic larvae will dwindle.

Once settled on the reef, fishes tend to rely more on visual cues for accurate information of the surroundings. Recent data from the work of Maud and others suggest elevated levels of CO2 will hinder visual acuity. Juvenile damselfish (Pomacentrus amboinensis) were acclimated to various CO2 levels and placed within sight of the predatory spiny chromis (Acanthochromis polyancanthus). Individuals acclimated at the elevated CO2 levels were shown to disregard the visual predatory cue, and increased foraging, activity and area usage were noted to be greater than the juveniles reared at lower CO2 levels. Their experiment was designed such that chemical stimuli from the chromis were not permitted to reach the juvenile damselfish, and as a result their data suggests the altered behavior was a result of CO2 impairing the visual system.

In an environment of poor visual acuity, fish rely on chemosensory to assess their surroundings. CO2 levels have been shown to alter a prey’s ability to evade predators, which are known to remove up to 60% of new juveniles returning to a reef system. Any process altering a prey’s ability to survive will greatly hinder survivability and persistence of the species as well as their connectivity among habitats. Predators play a critical role in maintaining ecosystem health and structure through the reduction of prey abundances. Any process altering their ability to efficiently hunt will decrease the health and productivity of an ecosystem. Evidence from Cripps and others strongly supports this. While investigating how predicted future levels of CO2 would affect a predator’s ability to accurately identify prey items based on chemical cues, they found the brown dottyback (Pseudochromis fuscus) displayed a strong preference of prey olfactory cues in control levels of CO2, but when subjected to elevated levels, they displayed avoidance behaviors. Dottybacks from the control group spent approximately 60% of their time in the flume containing chemical prey cues. That value decreased to approximately 40% for the dottybacks in the elevated CO2 treatments. Further, predation rates can depend greatly on CO2 levels. At intermediate levels of CO2, predation rates increase without variation in preference of prey items. Ferrari noted the CO2 levels in which the experiment was carried out appeared to have no effect on the predators. Evidence showed the increased predation rate was related to the CO2 affecting the prey’s ability to accurately identify a threat and to appropriately respond. Further analysis demonstrated the varying predator avoidance behaviors displayed by prey when subjected to higher CO2 concentrations. The data confirmed their hypothesis by showing variation and intensity of response to predatory cues greatly depended on CO2 levels. Evidence such as this show, as CO2 levels rise, delicate predator-prey interactions will change and negative density-mediated effects will be motivated; it will ultimately result in various trophic cascades leading to permanent, negative ecological effects.

Chemical cues have been shown to play vital roles in the ability of pelagic reef fish larvae to choose settlement sites and in accurate navigation to their natal. Similar to the assessment of predatory cues, alterations in these processes could be detrimental. Munday and others showed an increase of CO2 concentration disrupted the clown fish’s (Amphiprion percula) chemosensory ability to discern between appropriate and inappropriate habitat cues. Although the implications for this seem intuitive, Munday further suggests consequences for biodiversity maybe imminent. Navigational homing is directly affected by a decrease in pH, and cardinalfish (Cheilodipterus quinquelineatus), as well as other species, display impaired homing abilities when subjected to higher levels of CO2. Many species, like the cardinalfish, perform short migrations to exploit various regions for resources, and their survival relies on the ability to accurately return from such migrations. In addition to venturing further from their habitat, the rate of return to a home site by individuals from the CO2 treatment was approximately 20% lower than individuals from the control treatment.

Although the mechanism in which CO2 affects these sensory abilities is still quite vague, recent data suggest promising remedies. The GABA-A receptor, the main inhibitory neurotransmitter, has a high affinity for HCO3–. The influx of the bicarbonate ion is theorized to reverse the GABA-A receptor function and disrupt the sensory abilities within fish. Data show a gabazine treatment will reverse the effects of individuals subjected to elevated CO2 levels; these promising short term treatments could temporarily offset the climbing CO2 levels. Without future research, the ramifications associated with the gathering of inaccurate information through disrupted sensory abilities are of critical concern for the future conservation of all species.