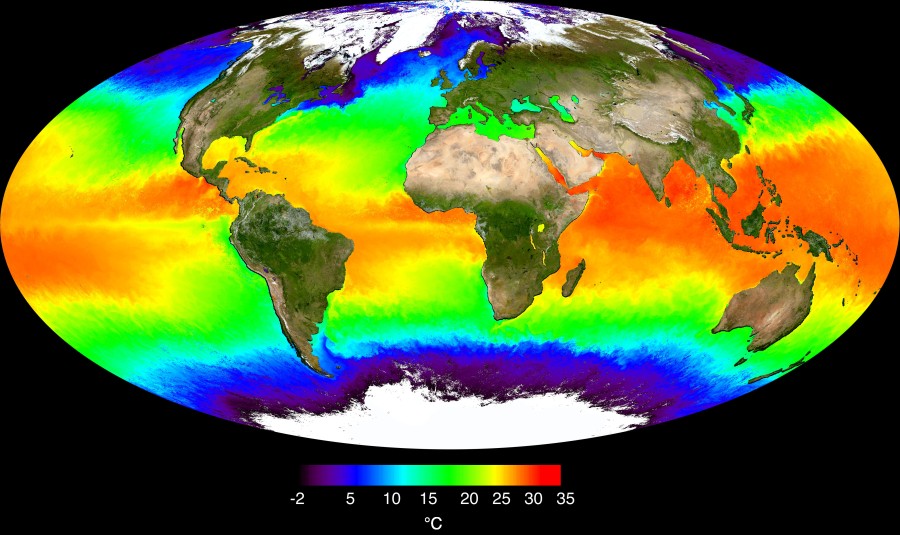 Over the past 250 years, atmospheric carbon levels have increased at an unprecedented rate never before seen in the geological record. Unfortunately, the actions of humans are to blame. Anthropogenic sources of CO2, mainly the burning of fossil fuels and deforestation, have accelerated climate change and are inducing changes in oceans around the world. This addition of CO2 has been shown to alter salinity regimes, alter oceanic currents, raise sea levels and lower the overall pH of ocean waters. These abiotic factors, in addition to a global trek towards higher mean temperatures, play critical roles in the ecology and distribution of fish assemblages by closely interacting with their physiology. For coastal communities, redistributions of populations could have economic consequences as important commercial and recreational fisheries are altered.

The current distribution of fish populations is the product of species evolving to exist within particular oceanic regimes. Climate change and ocean acidification are causing those regimes to change at paces in which some species are struggling to keep up with. Parameters such as temperature, wind patterns, currents and upwelling events all have direct and indirect effects on the distribution of fish assemblages. Although distributions rely on the physiological or behavioral responses of its individuals, the exact responses of populations are difficult to predict due to the immense variation in life history and strategies among species. General assumptions can be made, however. Suboptimal abiotic conditions tend to have negative effects, such as decreased growth rates, fecundity and survival, on individuals, and these effects are generally manifested at the population and community levels. As physiological responses become inadequate to overcome suboptimal conditions, individual fish will utilize behavioral responses by migrating beyond their current distributions to seek out conditions more conducive to their respective life history and obligatory metabolic demands. Furthermore, as abiotic parameters shift, species currently found on the edge of their tolerable ranges will be the first to migrate into new areas to exploit habitat and resources not previously available. The vast majority of individuals will likely utilize horizontal migrations, but in some instances vertical migrations will be appropriate.

The metabolic demand of fish increases with temperature, and individual fish will likely seek cooler temperatures to offset these rising metabolic needs. In the case of the sockeye salmon (Oncorhynchus nerka), the rising temperatures will force this species to migrate further into the Bering Sea, vertically migrate below the thermocline or cope with the costs of rising temperatures which will ultimately be detrimental to its survival. Migrating further into the Bering Sea and vertically migrating below the thermocline are classic examples of horizontal and vertical migrations. Another example can be found in a temperate reef habitat off the coast of North Carolina. In the late 1990’s 29 tropical species were found inhabiting the reef that were previously absent. This suggests tropical species are following the rising temperatures to higher latitudes and expanding their range. In both of the above examples climate change has increased the range in which species can be found, and the boundaries of their realized range have become expanded. Whether individual species migrate latitudinally or vertically in the water column, the new set of abiotic oceanic conditions will allow for redistribution of populations.

There is a breadth of understanding of how CO2 and climate change affect individual fish, but our overall understanding of how those effects will be manifested at the community level is still largely unknown. As populations shift, new interactions may disrupt delicate equilibria causing severe ecological repercussions such as trophic cascades or phase shifts. These interactions that were once previously absent will likely occur between species that are newly introduced to one another due to overlapping habitats and ranges. Much like making predictions at the population level, predicting how a community might respond to reach a new equilibrium will be most difficult.

Over the next weeks, this series of more serious posts will investigate how climate change and ocean acidification interact with an individual fish’s physiology in an attempt to predict how species might respond.